The following are my initial impressions from when I first launched the game; how I felt about the gameplay, interface/UX, and IAP/Ads/monetization (if present).

This is a word game. There are likely a million word games on the App Store, and this is another one. However this one has a gameplay mechanic that I haven't seen a million times, so I decided that for a buck that I would give it a shot.

Here is the game description from the Press Kit:

Would you like to relax, while training your brain and expanding your vocabulary.. of course you would. With Word Master you can, simply make as many words as you can that begin with the randomly selected starting letters e.g. Starting letters: ST. Words: Stamp/Stop/Stay etc.

This game is a great time killer for all situations as well as being an educational game that will help to improve your mental sharpness, spelling and expand your vocabulary. Training your brain has never been more fun or relaxing, once you start playing you won’t be able to put it down, until you knock out a high score.

“As creators, we wanted to make a game that was relaxing to play but also stimulated your mind at the same time and could keep users engaged for short fun-filled regular sessions. ”

Hmmm. I'm not sure how this will improve your vocabulary since it relies on you already knowing the words and being able to recall them as fast as you can. I see how working at that would sharpen your mind, however. As for it being "relaxing," I'm not sure how it can be both relaxing and stimulating at the same time. And games that claim "you won't be able to put it down" are also not usually relaxing. And that statement is usually false.

All that aside, here I go.

When I launched the game I was greeted with a ToS saying how my info will be collected and used. I've been seeing this more often lately. I think it must be a European thing, because here in the US people aren't told what will happen with the data that's harvested by the games they play. We have bigger problems at the moment.

The first thing I did after agreeing to the ToS was go to the "Shop" to see what the IAP is like: I do that with any game that has IAP, when possible. Sometimes devs hide the shop until you've been playing for awhile, and then spring it on you. It's nice to see *Small Bedroom Games* being more forthright with their additional monetization.

There are three packs for coins, but for some reason the prices are in GBP pounds. When I tapped on them to check, however, the price I would be charged if I completed the transaction was in US dollars. 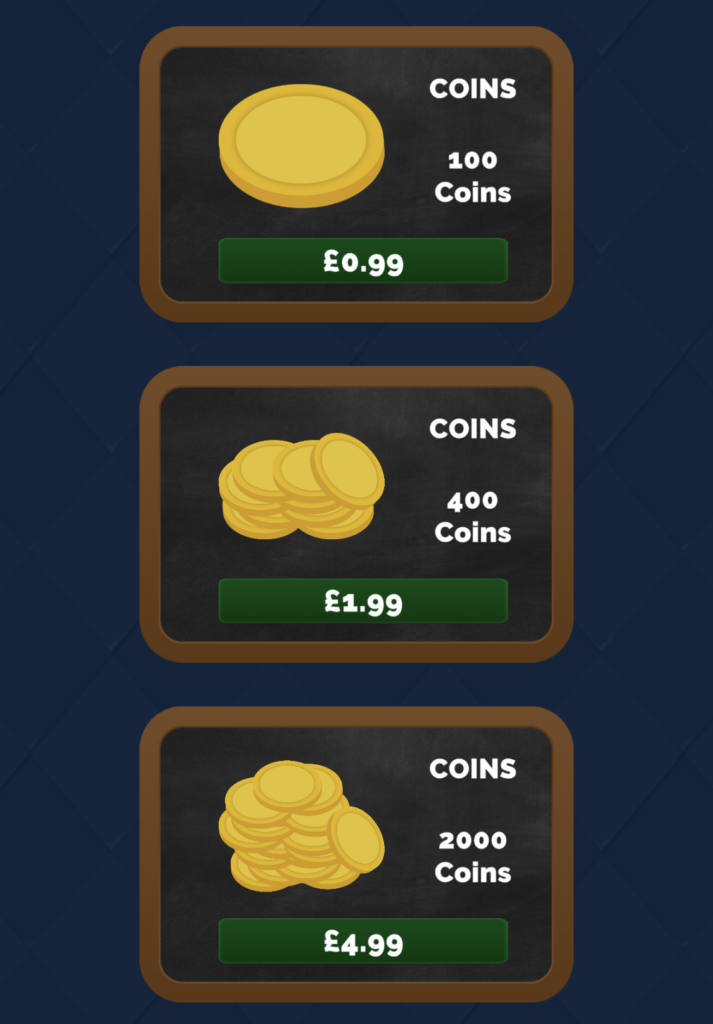 My hunch is that the buttons are images that weren't localized, but it could be some other reason. I don't know. I'm not a programmer.

That's all that can be purchased with actual money. It's nice to have only one form of consumable, but I also have a strict "no consumable IAP" policy when it comes to the games I play. I'll buy unlocks that can be restored, but never consumables.

The backgrounds and keyboards also cost coins, but are priced much higher than the power-ups at either 400 or 600 coins apiece.

I'm honestly not sure how the dev decided to price the backgrounds and keyboards. For example, the red and black backgrounds cost 600 coins each, but the yellow, purple, and green backgrounds only cost 400 coins each. The blue background starts off unlocked. With the exception of the blue keyboard, all of the keyboards cost the same amount as their matching backgrounds. You get a free brown keyboard, and the blue one costs 400 coins.

There isn't any variety to the backgrounds and keyboards other than the colors; they are all diamond shaped patterns, so I personally don't see a lot of drive to get different backgrounds or keyboards unless you really want one specific color or color combination. For instance, you might want a purple background and green keyboard to go for a Joker vibe when playing. 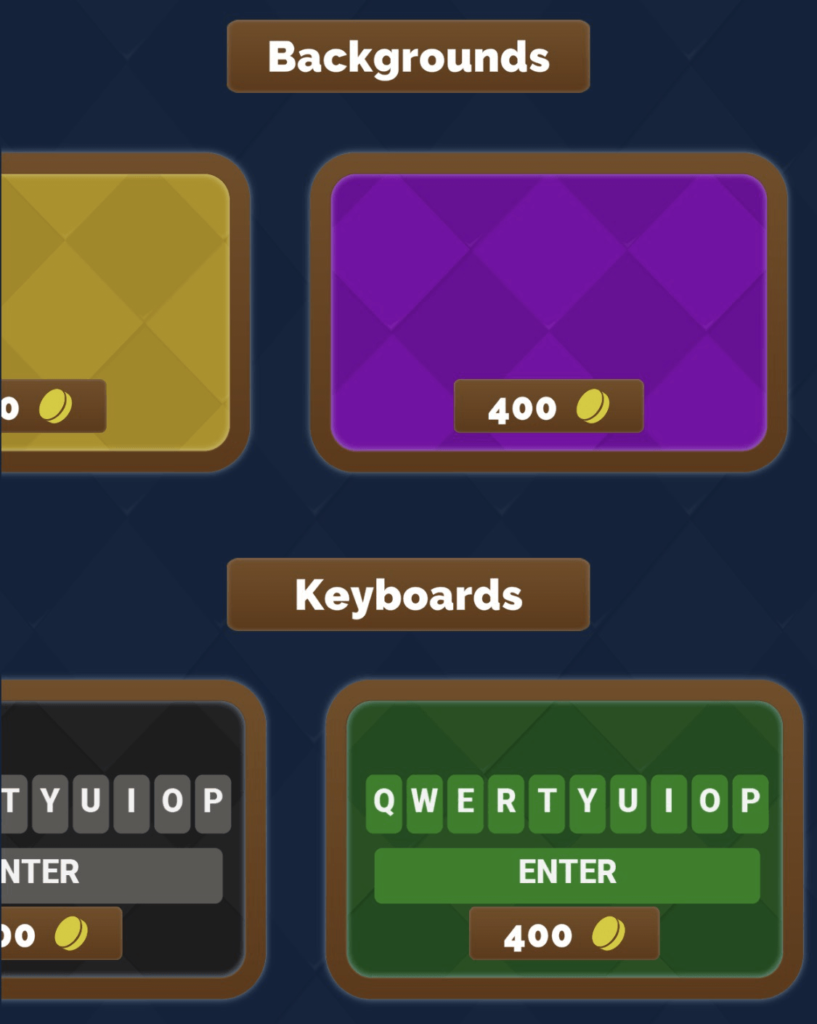 From the perspective of gameplay I see problems already, assuming you are someone for whom scoreboards matter. With the power-ups being so much more affordable than the cosmetics – and depending on how your coins are calculated after a game – I would expect people to use their coins primarily on power-ups in order to increase their scores and get more coins or to rise higher on the leaderboards. That could lead to a "pay-to-win" situation.

Luckily for me I don't care about scoreboards.

Is there a scoreboard that excludes any games where power ups were used? It doesn't look like it.

Note 1 to dev: You misspelled "Leaderboard" under the button at the bottom of the screen, and the "d" is dropping a line:

Also, the bar to swipe out of the app isn't hidden, so it's cutting across the words "Stats" and "Home".

And I just realized that the word "Shop" on the shop page is being cut off by the wonderful iPhone notch. I can't really take a screenshot of that, so instead I'll bust out my iPad and take a photo... 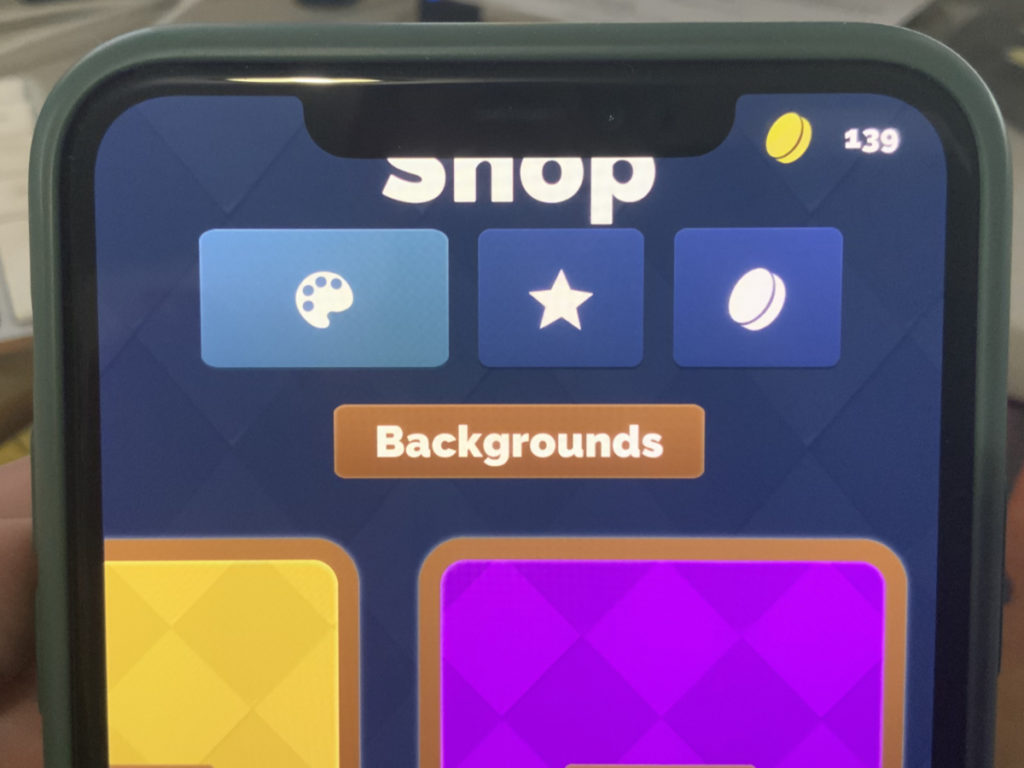 ... I guess I started with 500 coins because I just accidentally bought a keyboard while trying to scroll through them. That was a surprise. Oh well. I guess I have the blue keyboard now. At least it goes with the blue background.

That said, the game was fun except for one thing. When it starts, it starts. A three-second countdown to allow the player to get their bearings would be nice. The first round was several seconds in before I realized it had begun.

The other thing that will take getting used to is typing out a word without including the starting letters.

Oh, and I got 25 coins when the game was over. I don't know what determines how many coins you get. 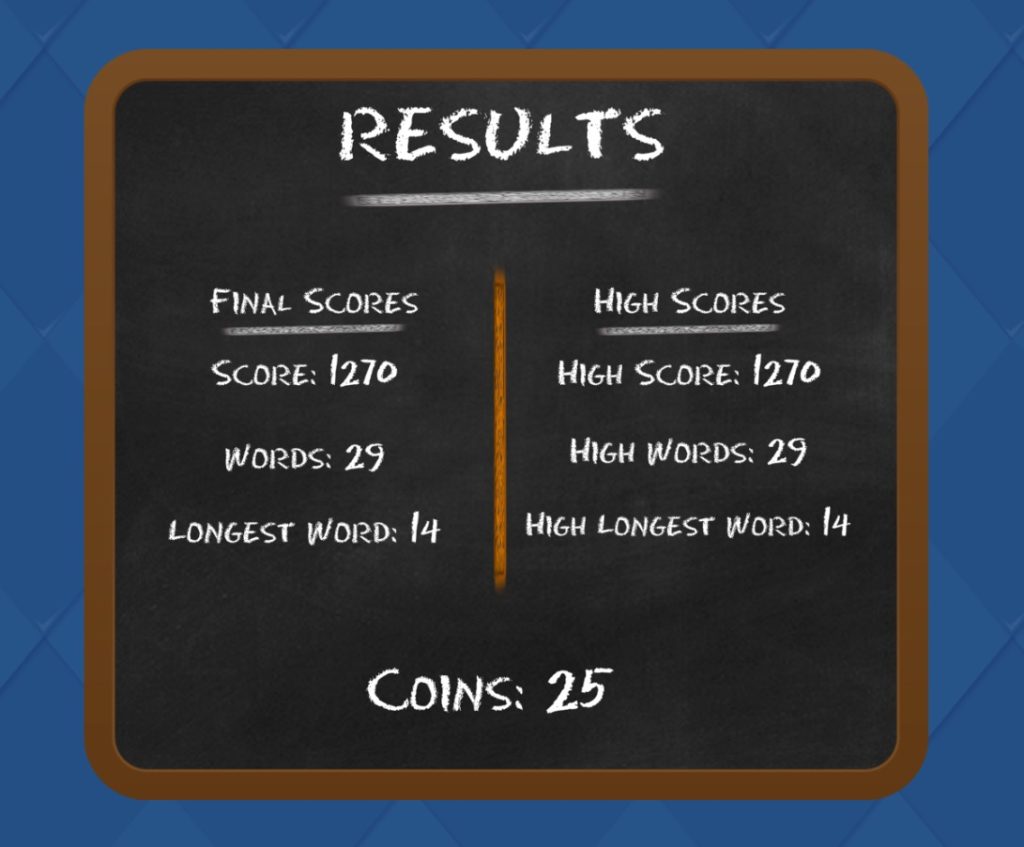 I'll play one more time to see if 25 coins are awarded every time.

Note 2 to dev: During this playthrough I think I accidentally hit the "redo" button instead of the "next" button when the round was over. I would recommend having the "next" button larger and closer to the results box instead of in the bottom right corner of the screen – maybe even overlapping it somewhat since there's a fair amount of room at the bottom of the results box. eg: 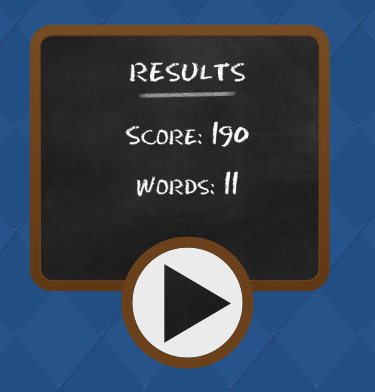 Note 3 to dev: Nope, I guess that's not what happened. All three rounds were only two letters this time for some reason, so when the second round didn't have an extra letter I assumed I restarted. Also, I got "CO" again, and every word I tired to use that I had entered the first time I got "CO" in the previous game wouldn't count... but I'm also not being shown a list of words I've already used, so THAT was annoying. If it stores every word I've entered and won't let me use them again in future games, I expect I'll be finished with the game before I earn enough coins for another keyboard or background. 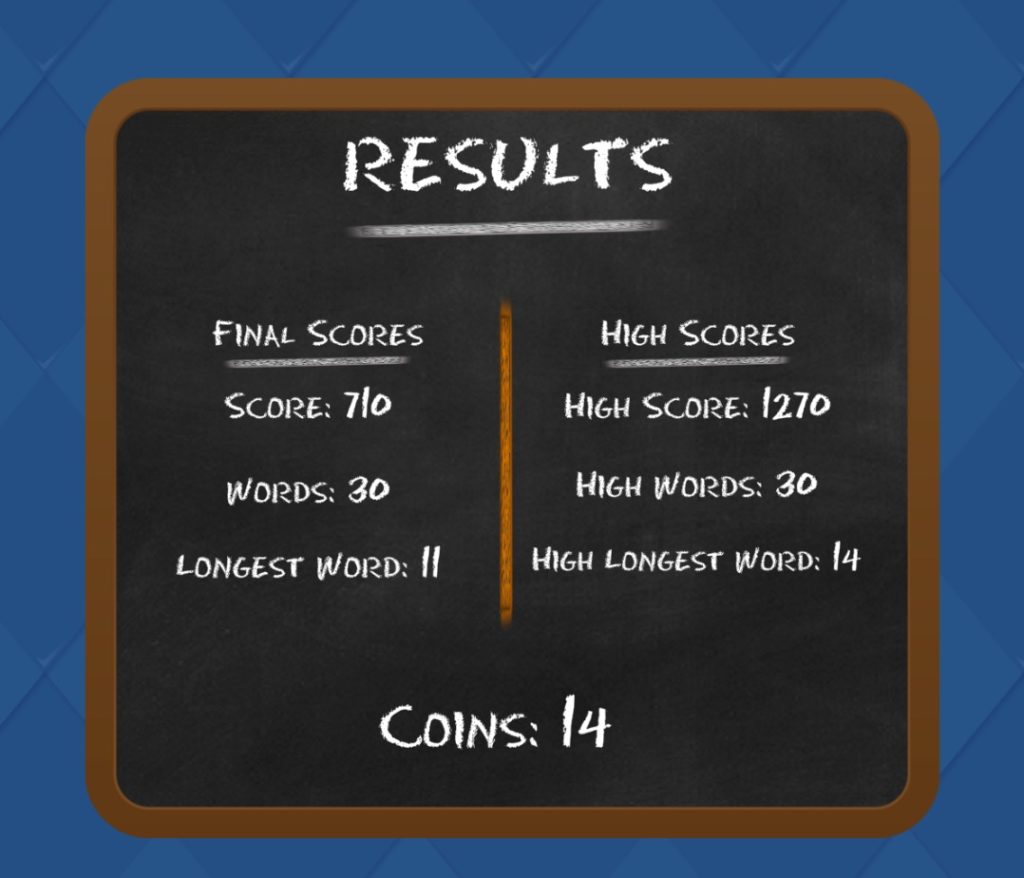 Not only is it not 25 coins each time, I got one more word than the first time and 11 fewer coins. So it must have to do with the total score, and longer words are worth more points.

Final note to dev: The stopwatch looks nice, but it's hard to gage the remaining time at a glance, especially since each round is a little longer, but the graphic is still the same. The option to have a digital time display would be nice. I also didn't notice either game if there was an audible cue that time was running out. I'd recommend that either speed up the music, or some other aural cue – but not something too jarring, just enough to give the player an idea that time is running out. Maybe start it at 15 seconds remaining?

My verdict after two rounds of playing the game:

I like it, and for me it was easily worth the asking price even with the bits I didn't care for, but if it hangs on to every word I've entered in previous games it will have limited lasting appeal for me. My vocabulary is large, but it's not infinite, and for "CO" to have already appeared as the prompt in two games is concerning.

I look forward to seeing if the game gets updated, and if it changes for the better.